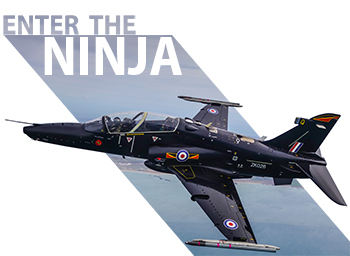 It was revealed in early February of this year that the RAF Tucano Display would not operate for the 2015 airshow season and beyond, and would be replaced by a Hawk T2 demo. Details were sketchy at first and although the change was well received there was much debate about what a Hawk T2 demo could offer. Initially it was expected to be a flying training demonstration, different to the full-handling display of the Tucano - and as this would be the first Hawk T2 display in the UK there was significant interest as to what it would offer over the Tucano, as well as earlier Hawk T1 demos. Details began to emerge over the following weeks regarding the nature of the team and excitement grew as it became apparent that the RAF’s newest display act would feature not just pyrotechnics but “smokey SAMs” – a first for a UK display act. The team were awarded their Public Display Authority in May, and their first public performance will be at the Royal International Air Tattoo, where they are set to fly on all three show days.

As a brand new military display, the 2015 Hawk T2 Role Demo team had to plan and build a display from scratch. Tasked with bringing something new to the UK airshow display circuit, pilots Ben Polwin and Toby Keeley and manager Al Branson needed to find a way to demonstrate the professional training and work of both IV(R) Squadron and the RAF as a whole to British airshow audiences. Toby talks to us about the formation of the RAF’s latest display team and the effort required to bring it together in the early stages:

"The Pilot selection process began in October 2014, and those Qualified Flying Instructors interested in applying were asked to submit their flying experience and ideas for the sequence to the Deputy Supervisor as well as their reasons for applying before he and the Boss forwarded their Pilot selection to the Station Commander for approval. Ben Polwin and I were lucky enough to be chosen which is great as we are good friends and shadowed each other through our flying careers. We even spent 6 months together at CFB Cold Lake, Canada on our Tactical Weapons Flying Training on the Hawk 115 before both being streamed to the Tornado GR4 at RAF Marham, albeit on different front-line squadrons. Being friends and knowing how each other works is a huge advantage as there is a lot of trust involved in the flying on the Role Demo, particularly as we arrive together at 100ft and 500kts!

"Ben and I had a blank canvas for this year’s Hawk T2 role demonstration as it is the first time the Hawk T2 has been displayed on the airshow circuit, which at first glance was quite a daunting task as there wasn’t anything we could just develop upon from the previous year. Ben was chosen as the Leader, I the Manager, and to name a few of the tasks that needed tackling were designing the sequence, understanding the display rules, creating terms of references, training folders, work-up/step-down height plan, risk assessments, website, charity, sponsorship, logo/promotional material, commentary, pyrotechnics, the list goes on... We chose the IV(R) Sqn formation callsign ‘Ninja’, which we think works well with the little black jets, therefore Ben is ‘Ninja 1’ and I am ‘Ninja 2’. Thankfully, we managed to obtain a Holding Officer, Flt Lt Al Branson to assist which is a massive help as we are putting this together in our spare time between instructional sorties."

Of course, all of this happens behind the scenes and what the public sees on the day will be the jets in the air and, at some venues, the pyrotechnics on the ground. Any military display act has to be stringently designed and rehearsed in order to be granted its PDA, without which it simply would not be allowed to perform at airshows. Consequently, the display has to be carefully brought together to meet safety regulations while at the same time being allowed to fulfil its purpose, namely to excite the crowds and promote British military flying. As Toby explains, even for experienced pilots there is a great deal of build up:

"As it is technically a role demonstration and not a display, the sequence doesn’t include any aerobatic manoeuvres, so instead our aim is to demonstrate as much of the syllabus we teach the students on IV(R) Sqn as possible within an eight minute slot. We began by designing the sequence on our Hawk Advanced Mission Planning Aid (HAMPA), a computer based mission planning tool which shows the ground track, parameters and timings of the sequence. It has been tweaked ever so slightly, but the sequence we fly is more or less the one we initially put together on HAMPA back in December. After initial design, we flew the sortie in the Full Mission Simulator by linking two of them together, which both enabled us to gain confidence in the sequence, and reduce the number of airborne sorties thus limiting the impact on student flying. Because the sequence is a selection of manoeuvres we teach day-to-day it was decided that we would require 12 work-up sorties.

"Flying began in March overhead RAF Valley using the short runway as a display line. Starting at 1,000 ft, we stepped down the height to 100 ft over 5 sorties (with supervisor approval) and all sorties were filmed by the station photographers. We flew sorties using different runways as display lines, a coastal practice at our local beach, and also practiced at RAF Cranwell; useful as you get pretty used to the features at your home base. We experienced challenging weather, working to our limits of 1,000ft cloud base and 5km visibility, and also with RAF Valley’s typically strong breeze!"

The UK airshow season is a busy one, and though the team’s first year might be a little shorter than some other teams’ they are no less ambassadors for the RAF and engage in the same promotional and charitable activities. The team are also active on social media, promoting the new team and getting their image and that of IV(R) Squadron out there for the public to engage with. Fortunately, although the team has been attending many of the various events and activities that go with being a display act along with rehearsing their display, coupled with the 'day job' of instructing the future pilots of the Royal Air Force and Royal Navy, progress has been smooth:

"We’ve been busy attending meetings, courses and visits, including the RAF Events Team ratification meeting at RAF Northolt (where it is decided where we will be displaying), the pre-season display symposium, a media course at RAF Halton, BAE Systems for promotional material support at Warton, Hope House Hospice (one of our chosen charities) and we have also presented to the Valley Aviation Society.

"Things are now coming together as we successfully flew our Public Display Authority (PDA) on Monday 18th May with Air Officer Commanding 22(Trg) Group Air Vice Marshal Turner observing a full run-through from the Tower before granting us PDA post the debrief. We have since flown a successful display at RAF Valley Families’ Day (enjoyed by our parents) and are really looking forward to our first public display at RIAT in July. Let’s hope for some good summer weather and a successful first role demonstration of the Royal Air Force Hawk T2!"

The team has a large gap between its PDA being granted and its public debut. Does this present a challenge in terms of focus or do you maintain a steady rehearsal rate beforehand?

We have practiced once per week at Valley using different display lines which has maintained our focus and continuity.

How important is engaging with the public on social media to you?

Very important; it allows us to get our message out to people and to gain more awareness of the Hawk T2 Role Demo.

What does it mean to you to be presenting a brand new RAF display to British audiences?

It is thoroughly rewarding, and a huge privilege for Ben and I to be selected as the first T2 Role Demo Pilots.

What has been your biggest challenge in forming the team?

We had nothing to ‘copy and paste’ from previous years’ work, so putting the administration side together in our spare time whilst instructing full-time has been a challenge.

And the most rewarding aspect?

Are you planning to perform at any European shows in the future?

Unfortunately not, this year is a bit of a trial year so UK only.

Some of our forum members have questioned the decision to stage the team's public debut at RIAT and not at the RAF's own show at Cosford. Is this a decision you could expand upon?

The events that we display at are decided upon by the RAF Events Team, and it so happens that RIAT is first on our list this year. We would have loved to have participated at Cosford and many other air shows but we are limited to seven weekends this year.

What, if anything, would you like to see added to the display in future seasons?

I’m really pleased by what we’ve put together for this year, especially the sequence and the pyrotechnics. It would be great to have a colour scheme for the jets, but it’s not something we have been able to do this year unfortunately.

Do you think there's room for a joint role demo with the Apache display team?

We teach Close Air Support on IV(R) Sqn, so it would be relevant to perform a joint display with the Apache; however the logistics would be highly difficult as we are limited on the amount of work up sorties (11 in total this year).

Do you have different displays for various weather conditions or does the nature of the role demo not necessitate this?

We have one display which has the flexibility to stay below 1000 ft if the cloud base dictates, otherwise can be flown up to 3000 ft in the guns jink during the ‘air combat’.

As far as we can tell this is the first use of "Smokey SAMs" by a UK display act. How did you secure their use and how do you think the public will react to them?

Having flown against Smokey SAMs in the Tornado GR4, they add extremely realistic value to training. We want to give people an idea of the type of training Fast Jet Pilots receive and hope the public will love the visual impact of the Smokey SAMs.

Have some of the recent foreign 2-ship displays influenced any of your routines, thinking in terms of the Polish Su-22 Fitter pair and the French Ramex Delta duo?

Rather like the SU-22 pair, we are combining close formation flying with high speed passes, but theirs has a more operational focus and includes afterburner! We aim to tell a story of advanced fast-jet flying training that students receive at RAF Valley, from close formation flying to airfield attacks and air combat, and the beauty of the Hawk is that we can keep it within a relatively tight space.

UK Airshow Review would like to thank Toby Keeley and all at IV(R) Squadron for taking the time to give us their perspective on a new display, and Paul Heasman for his assistance and photographic contributions. We wish them the best of luck for the 2015 season.