With the drawdown of RAF Nimrod MR2 operations at the end of March 2010, a number of Nimrod’s have been acquired by museums and classic flight operators around the country. Throughout April and May delivery flights took place to various locations. Sadly, but perhaps inevitably, none of the aircraft will grace the skies again, although a number will be kept in a live condition.

Russell Collins was sent to Coventry to report for UK Airshow Review. Photos as credited.

The Yorkshire Air Museum at Elvington was the first to receive a Nimrod MR2 (serial XV250) from RAF Kinloss on Tuesday 13th April 2010. The Air Museum intends on retaining the aircraft in fully working order and hopes that it could participate in a taxiing capacity at future events. 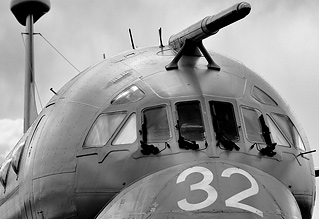 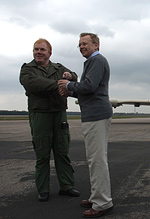 Manchester Airports Aviation Viewing Park was the next delivery flight with Nimrod MR2 XV231 on Wednesday 21st April 2010. The aircraft is currently being decommissioned and it is expected to be moved to the Aviation Viewing Park at the end of May where it will be preserved as a static example.

The Cold War Jet Collection at Bruntingthorpe airfield was the next to take delivery of the mighty hunter with Nimrod MR2 XV226 being flown into the airfield on Tuesday 27th April 2010. The intention is to keep the aircraft live to participate in taxi events. The aircraft will be on display at Cold War Jets next open day on Sunday 30th May.

The last delivery at the time of writing was the acquisition of Nimrod MR2 XV232 by Classic Flight at Coventry airport. With the Nimrod flying in for a final time on Tuesday 11th May 2010. Original plans were to put Classic Flights Venom FB50 WK436 and Jet Provost T5A XW433 in formation with the Nimrod on arrival, sadly the idea of this unique formation was scrapped by the powers that be. Classic Flight also hopes to keep the aircraft in fully working order and could participate in future taxi events as well as the popular night time shoots at the airport.

The RAF Museum at RAF Cosford, the Solway Aviation Museum at Carlisle Airport and the RAF Manston History Museum at London Manston are all possible future homes to some of the remaining Nimrod MR2 fleet.